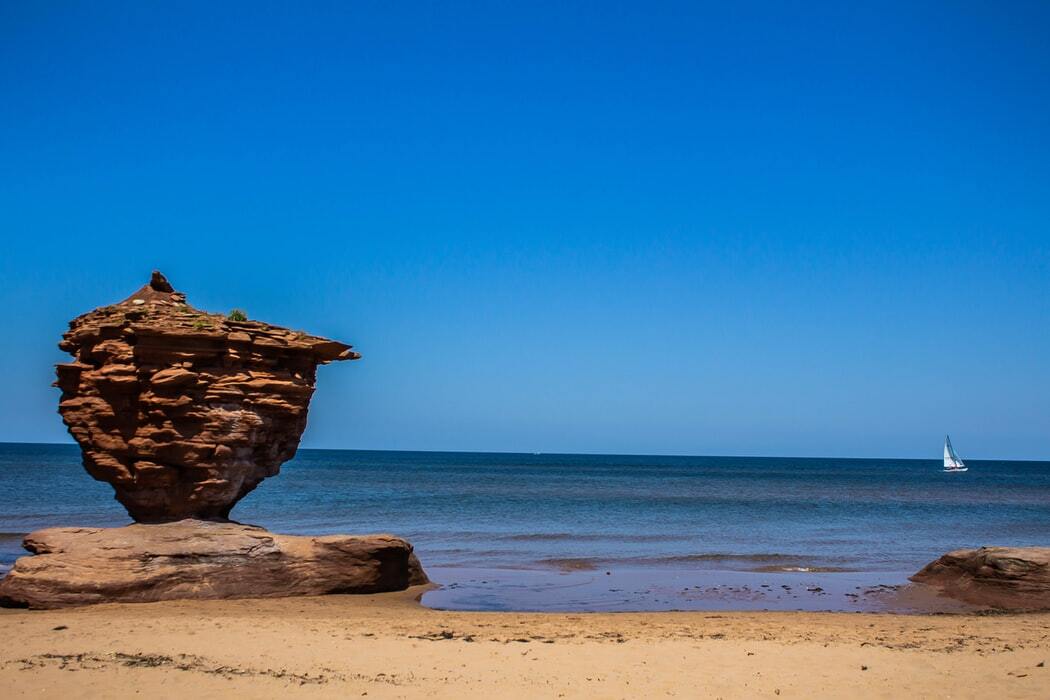 Photo credit: Prince Edward Island – Donavan Wall – @Fragments.Studios - Unsplash
Prince Edward Island is one of Canada's favourite vacation and touring destinations. Twice named the number one island in North America by readers of Travel + Leisure magazine and voted among the top three temperate islands in the world as part Conde Nast's recent Readers' Choice Awards in Traveler magazine, it's obvious Prince Edward Island has a lasting impression on those who visit.
ABOUT PEI
This little Island packs a big punch. With adventure around every turn, beauty that’s hard to even believe and food that is out of this world, Prince Edward Island will charm you from tip-to-tip. Below you can find all the resources you will need to plan the perfect PEI vacation. We can’t wait to see you!
WHERE IS PEI?
Prince Edward Island is located off the eastern coast of Canada, nestled between the provinces of New Brunswick, Nova Scotia, Québec and Newfoundland and Labrador in the Gulf of St. Lawrence.
Whether you drive across the Confederation Bridge from New Brunswick, take a ride on the ferry from Nova Scotia, or fly in to the Charlottetown airport, you’ll find our Island easy to navigate. Visit charming towns, vibrant cities, and quaint villages. A new adventure around every turn.
https://www.tourismpei.com/pei-interactive-map
https://www.tourismpei.com/about-pei
https://www.tourismpei.com/10-quirky-things-you-didnt-know-about-pei-0
BIRD'S-EYE VIEW OF BEAUTIFUL PEI
Vacations are more magical when you add a little Island
The Northern Take | Michael Smith
Chef Michael Smith is one of Canada’s most loved food aficionados. Born in New York, his career took him around the world, but it was Canada that ultimately stole his heart. Join us, as Michael takes us on a journey through his life and career on the East Coast highlighted by his and his wife’s devotion to their business and to creating home-cooked meals that Canadians love.
Dec 14, 2020
Rachel Beck (born November 19, 1983) is a singer-songwriter from Stratford, Prince Edward Island, Canada.
She released her self-titled debut record March 2, 2018. Her lead single 'Reckless Heart' reached #1 on the CBC Music Top 20 Chart [1] and earned Beck a SOCAN #1 Award.[2] In addition, her record garnered eight nominations at the 2019 Music PEI Awards[3] and two nominations at the 2019 East Coast Music Awards.[4] Beck was awarded the Music PEI Rising Star Recording of the Year and Pop Recording of the Year.
Greek Island Odyssey with Bettany Hughes 1/6 - YouTube
Off the coast of Turkey, Bettany meets an underwater archaeologist who shows her shipwrecks which date back over two and half thousand years.
Mar 2, 2021 History Document Nerd
Six Unique Food Experiences in Tokyo: From Casual Standing Sushi Bar to Destination Restaurant
Best cuisine, markets, neighborhoods and restaurants for food lovers in Tokyo. For traditional Japanese food with a modern flair, make a reservation at upscale Washoku Souten, located on the 36th floor of The Prince Gallery Kioicho. To explore historic food shops, head to Nihonbashi, where Japanese sweets, traditional tea and dashi are just some of the interesting finds. This video also includes Ukai Toriyama, a Shibuya food tour, Arigato Japan Food Tours and at Washoku Souten and the now closed Tsukiji Market
Darley Newman – October 2020
This Time with Alan Partridge Series 2 Episode 1 (30th Apr 2021) - YouTube

World Book Club - Louise Penny: Still Life - BBC Sounds (podcast)
Released On: 01 May 2021
Available for over a year
This month World Book Club talks to acclaimed Canadian writer Louise Penny about the very first in her astonishingly successful series of Inspector Gamache crime novels. When a much-loved inhabitant of the village of Three Pines in the Eastern Townships of Quebec is found dead in the woods during Thanksgiving, the locals are certain that it was just a tragic hunting accident. But Chief Inspector Armand Gamache from Montreal suspects foul play and won’t rest until he’s rootled out the darkness at the heart of this seemingly peaceable and bucolic community. His always courteous but also insistent sleuthing gradually brings to light the family secrets and long-held grudges seething under its apparently serene surface.
https://www.bbc.co.uk/sounds/play/w3ct1x9m
'Guilt should play no part in pleasure': British cook Nigella Lawson tears down guilty pleasures in new book (CBC Podcast – Q with Tom Powers)
Nigella Lawson’s new book of recipes and essays is about pleasure and ritual
Nigella Lawson is a British cook and TV presenter
CBC Radio · Posted: Apr 29, 2021 10:46 AM ET | Last Updated: April 29
'Guilt should play no part in pleasure': British cook Nigella Lawson tears down guilty pleasures in new book | CBC Radio
https://www.cbc.ca/listen/live-radio/1-50/clip/15840210
Laurie Woolever on finishing Anthony Bourdain's last book without him (CBC Podcast – Q with Tom Powers)
Anthony Bourdain wanted to show his audience travel destinations as he experienced them — whether that meant he was happily devouring Sichuan cuisine or downright depressed in the desert of Paraguay. Bourdain died in 2018, leaving his longtime assistant and friend, Laurie Woolever, with an unfinished book. Woolever joined Tom Power to talk about taking on the project, titled World Travel: An Irreverent Guide.
https://www.cbc.ca/listen/live-radio/1-50/clip/15838760
Art That Was Never Finished
Artists have abandoned artworks for many reasons throughout history. Guest host John Green shares some of his favorite unfinished artworks and explains why they resonate with him so deeply. Featuring work by Michelangelo, Leonardo da Vinci, Edgar Degas, Alice Neel, Kerry James Marshall, and very many presidential portraits. Thanks to our Grandmasters of the Arts Divide By Zero Collection and David Golden, and to all of our patrons, especially Anthony Chivetta, Rich Clarey, Iain Eudailey, Tom Forwood, Patrick Hanna, Andrew Huynh, Eve Leonard, Audrey Mak Tung, David Moore, Jane Quale, Gabriel Civita Ramirez, Andrew Sheeler, Boris Silantiev, Josh Thomas, Constance Urist, and Roberta Zaphiriou.
The Art Assignment – June 2020
A train ride into Japan's past | DW Documentary
Kyushu is said to be the wellspring of Japanese civilization. Yet few tourists visit the southernmost of Japan's main islands. This documentary contrasts modern Japanese cities with traditional customs in the countryside. The rail journey begins in Fukuoka - a city with a metro population of 2.5 million - and ends at the southern tip of the island, in the city of Ibusuki. As the train rolls along, it travels through time - and reveals the amazing diversity and contrasts of the most southerly of Japan's four main islands. The trip provides spectacular landscape views, as well as deep insight into a foreign culture, and its ancient traditions and modern lifestyles. In the West, Kyushu is one of the lesser-known regions in the 'Land of the Rising Sun.' Even for the Japanese, the green, mountainous island is seen mostly as a holiday spot. Europeans rarely visit this part of the country - but there are plenty of restaurants and cafes that have names like 'Wolfgang,' 'Bavaria,' or 'Côte d'Azur.' Travel guides say that these words sound 'European' to Japanese. The family of the emperor, or Tenno, comes from Kyushu as well. This is also where the dynasties of the proud warrior class, the samurai, have their roots. And there are a number of active volcanoes on Kyushu. One of the most famous is Mount Aso. Its caldera - the cauldron-like hollow at the top -- has a circumference of about 120 kilometers. Jan 20, 2021  DW Documentary
Sahara Desert, Algeria. Aerial 360 video in 5K
Don't forget that this is 360 video: you can change the angle of view. Occupying the area of 9 million sq km, Sahara Desert covers 30% of the total territory of Africa and is divided between many countries. AirPano team has created 360 video of its northern part, on the territory of Algeria. It is an astonishing beauty: the area seems to be monotonous only at first sight, when in fact, the landscape is picturesque and anything but dull... AirPano VR  August 2019 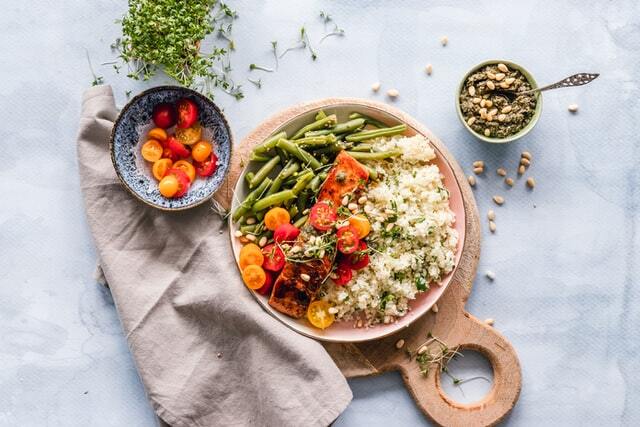 Photo Credit: Ella Olsson - @ellaolsson – Unsplash
How Chef Asma Khan Created an All-Women Kitchen
Darjeeling Express was built as a safe haven for women in restaurants.
If you’ve seen Netflix’s popular show Chef’s Table, chances are that you already know Asma Khan. Raised in Kolkata (formerly known as Calcutta), India, as a second daughter (an often overlooked member of the family), the chef and restaurateur behind London’s Darjeeling Express is known for serving the Indian dishes of her childhood, filled with Bengali, Mughlai, and Bihari influences. But she has also worked tirelessly to create a safe space for many more “second daughters” like herself, by hiring an all-women staff, most of whom are South Asian immigrants. We caught up with Khan on the eve of the restaurant’s move to its new Covent Garden location, to discuss the food she grew up eating, sexism in the industry, and the pandemic’s ongoing impact on restaurants.
BY KAMALIKA MUKHERJEE
August 28, 2020
https://www.cntraveler.com/story/how-chef-asma-khan-created-an-all-women-kitchen
Art Cooking: Frida Kahlo | The Art Assignment | PBS Digital Studios
We explore the recipes of artist Frida Kahlo, whose work celebrated Mexico's history, vivid colors, and it's FOOD. On the menu: 1) Chiles Stuffed with Cheese aka Chiles Rellenos 2) White Rice with Plantains 3) Nopales Salad 4) Tequila.  The Art Assignment - August 2017 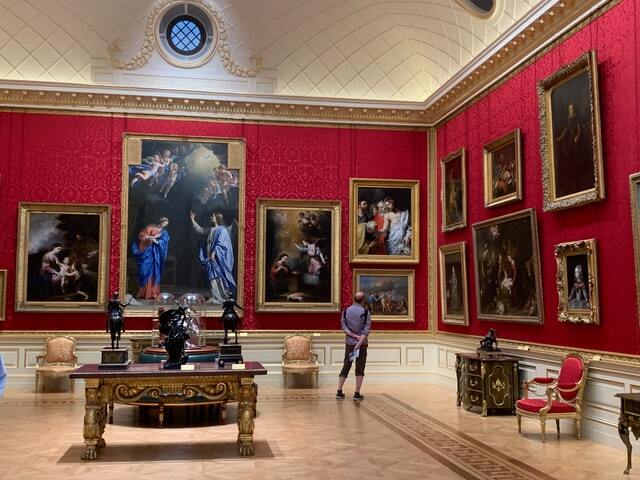 Photo Credit: Terry Browning- @terryrb - Unsplash
Fake or Fortune Series 7 - Episode 1
Art detectives Fiona Bruce and Philip Mould attempt to prove that a still life of a glass jug and pears is the work of celebrated British artist William Nicholson.
Aired: Apr 15, 2021  TVO.org
https://www.tvo.org/video/documentaries/fake-or-fortune-series-7-episode-1
What's in Bannock?
'If we didn't have scone back then, we might have starved to death.' Bannock, or as some call it, 'scone,' has a long history with the Indigenous people of North America, for reasons of practicality, survival and nostalgia. Chris Beaver makes a video featuring his father, Carl Beaver, who invites us into his home in Alderville First Nation to demonstrate making bannock while reflecting on a lifetime of loving it.  Tvo docs -May 29, 2019
Top 25 Medieval Places To Visit In Europe
Europe is home to countless medieval places. From the island of Mont Saint-Michel, to the medieval walled city of Avila, Europe's Middle Ages provided some of the world's most amazing places and history! Where is your favorite Medieval location in Europe? Ryan Shirley March 26, 2021
Costa Rica - SHORT TRAVEL VIDEO
Experience with us a visit in Costa Rica, a unique and truly amazing country of Central America. We have visited the Monteverde Cloud Forest, La Fortuna waterfall, Catarata del Toro, Manuel Antonio National Park, Lake Arenal, and some beautiful beaches along the Pacific Ocean. In this travel video you will see a short preview of all these attractions including some beautiful drone shots. We really enjoyed the visit in Costa Rica very much.  OneSmallPlanet – May 2020
Northern Islands 4K | Drone | Faroe, Lofoten & Senja
The best shots from my trip in the northern islands: Faroe Islands, Lofoten Islands & Senja (Norway). Enjoy aerial views of gorgeous locations: Vagar, Tindholmur, Kalsoy, Tjornuvik, Henningsvaer, Nusfjord, Reine, Hamnoy, Sakrisoy, Segla… Gaëtan Piolot  - Filmed pre-COVID – Nov 2019
Lead photo credit: Market in Los Mártires, Bogotá - Alexander Schimmeck Unsplash
Any destination and other content featured which is not specific to JWH tours provided in this newsletter is for general information and knowledge purposes only and not an endorsement. The information is gathered through various sources and is subject to change at any time without notice. It is the sole responsibility of the traveller to check with the proper authorities regarding travel to all past, current and future JWH newsletter featured destinations.
Thank you

In Peru, Jeff Fuchs led Team Outpost across the Andes, to the community of Chawaytiri and the highlands of Tanta,... learn more

Photo credit: bboellinger - Pixabay Visit Czech Republic In this small country at the heart of Europe, you will always... learn more

Why We Travel In times of crisis and challenge, we ask ourselves: What is the true value of travel? Is... learn more