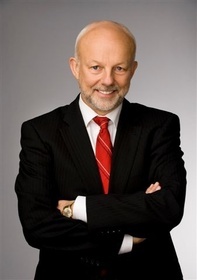 VANCOUVER, BC - Best known as Artistic Director of Vancouver’s Bard on the Beach Shakespeare Festival, Christopher Gaze has performed in England, the USA and across Canada. Born in England, he trained at the Bristol Old Vic Theatre School before coming to Canada in 1975 where he spent three seasons at the Shaw Festival.

He moved to Vancouver in 1983 and in 1990 founded Bard on the Beach which he has since nurtured to one of the most successful not-for-profit Arts organizations in North America, with attendance exceeding 91,000.

In addition to performing and directing for Bard, Christopher’s voice is heard regularly in cartoon series, commercials and on the radio. He also hosts Vancouver Symphony’s popularTea & Trumpets series and their annual Christmas concerts.

His many honours include induction into the BC Entertainment Hall of Fame, Canada’s Meritorious Service Medal (2004), Honorary Doctorates from UBC & SFU, the BC Community Achievement Award (2007), the Gold Medallion from the Children’s Theatre Foundation of America (2007) and a Jessie Award for Best Supporting Actor for his performance in Equusat The Playhouse.

As an Olympic ambassador, Christopher was honoured to run with the Olympic flame for the 2010 Games. A gifted public speaker, Christopher frequently shares his insights on Shakespeare and theatre with students, service organizations and businesses.