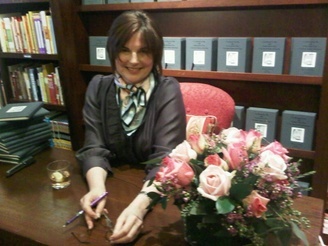 VANCOUVER, BC - Barbara-Jo’s Books to Cooks - www.bookstocooks.com - opened in Vancouver’s Yaletown district in the fall of 1997.After 20 years in business, the store closed it’s doors end of February 2017.

Barbara-jo McIntosh, the store’s owner, envisioned an epicurean’s delight, where food lovers and cooks of all abilities would find inspiration. Barbara-jo McIntosh recently launched her latest book Cooking for Me and Sometimes You: A Parisienne Romance with Recipes.

Barbara-jo McIntosh is an award-winning food professional with over 25 years experience in the food and hospitality industry.Formerly the owner of the popular Vancouver restaurant Barbara-Jo’s Elegant Home Cooking, she is now a passionate bookseller and supporter of the culinary arts. Author of the bestselling Tin Fish Gourmet, Barbara-jo served on the prestigious James Beard Awards cookbook selection committee for six years.

In 2003, Vancouver Magazine honoured her with a lifetime achievement award for her many contributions to the local culinary scene. An author herself, Ms. McIntosh plans to travel to France and continue work on another cookbook project.