Lonely Planet
Every year we get together with our writers, editors, online communities and staffers to rank the top 10 countries, 10 regions, 10 cities and 10 best value destinations for the year ahead. Find out what made the list for 2020 here: www.lonelyplanet.com/best-in-travel

is spectacular structures are spellbinding sunsets

Wedged like a grape between Brazil’s gargantuan thumb and Argentina’s long forefinger, Uruguay has always been something of an underdog. Yet after two centuries living in the shadow of its neighbors, South America’s smallest country is finally getting a little well-deserved recognition. Progressive, stable, safe and culturally sophisticated, Uruguay offers visitors opportunities to experience everyday ‘not made for tourists’ moments, whether caught in a cow-and-gaucho (cowboy) traffic jam on a dirt road to nowhere or strolling with maté-toting locals along Montevideo’s beachfront.
Short-term visitors will find plenty to keep them busy in cosmopolitan Montevideo, picturesque Colonia and party-till-you-drop Punta del Este. But it pays to dig deeper. Go wildlife-watching along the Atlantic coast, hot-spring-hopping up the Río Uruguay, or horseback riding under the big sky of Uruguay’s interior, where vast fields spread out like oceans. Lonely Planet 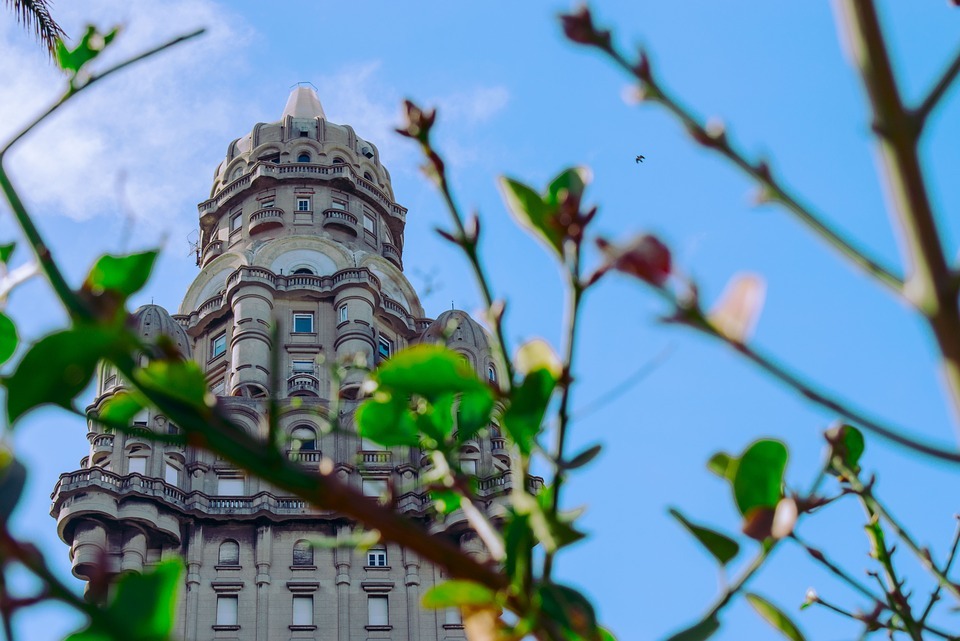 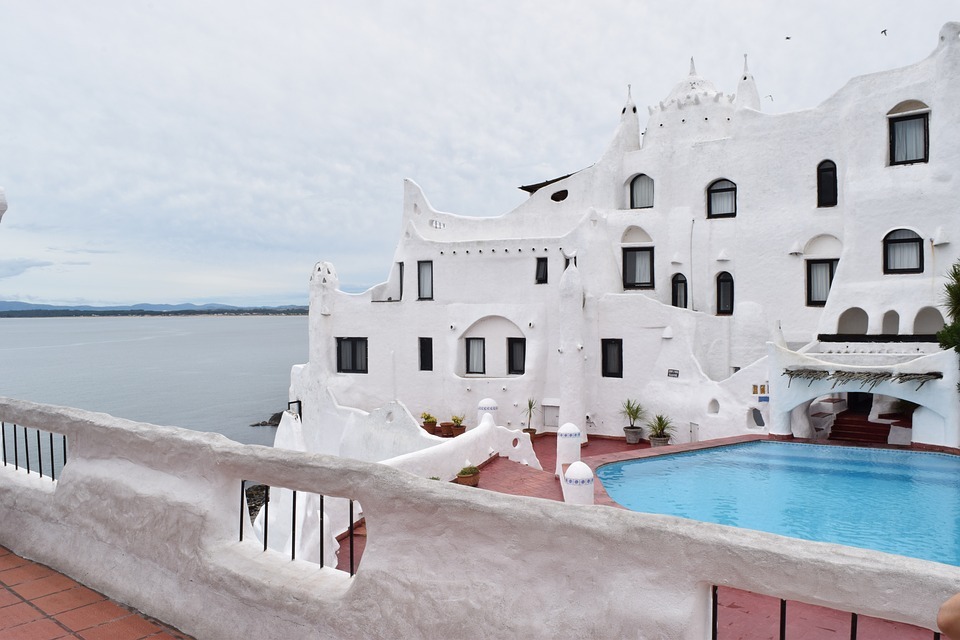 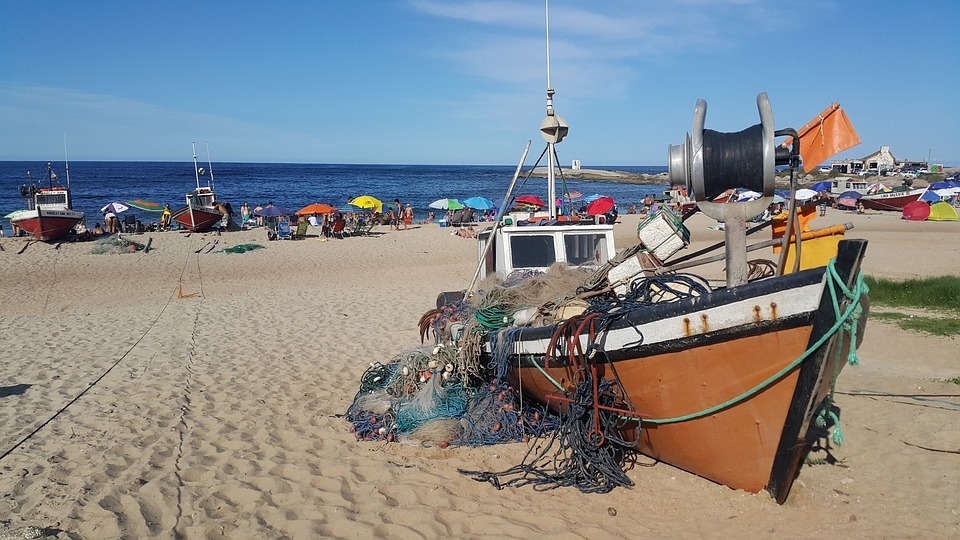 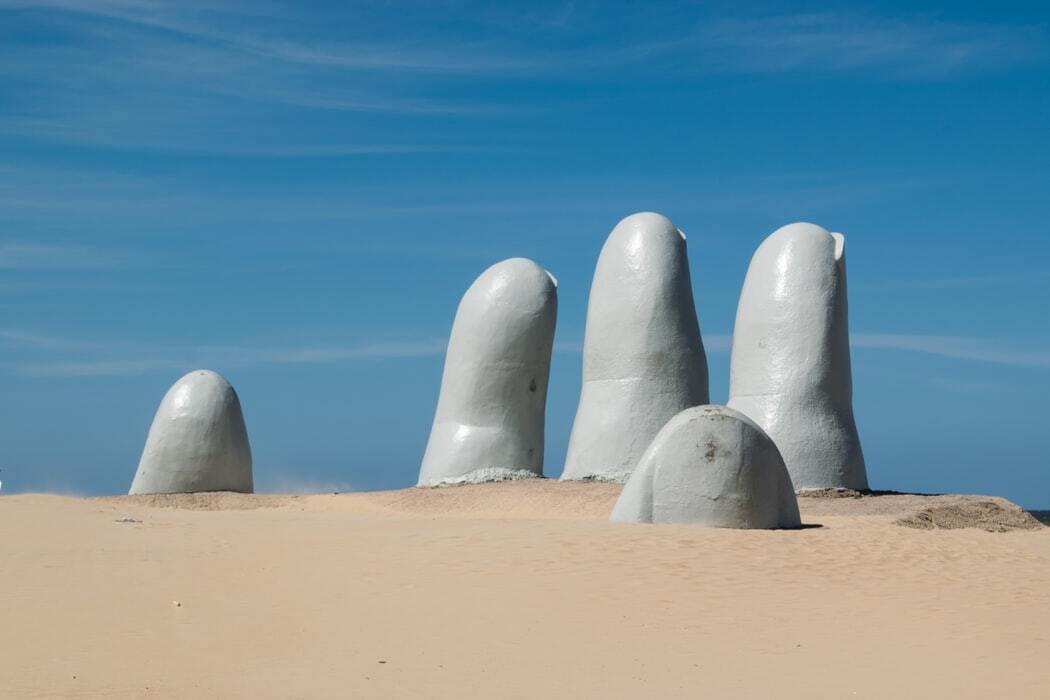 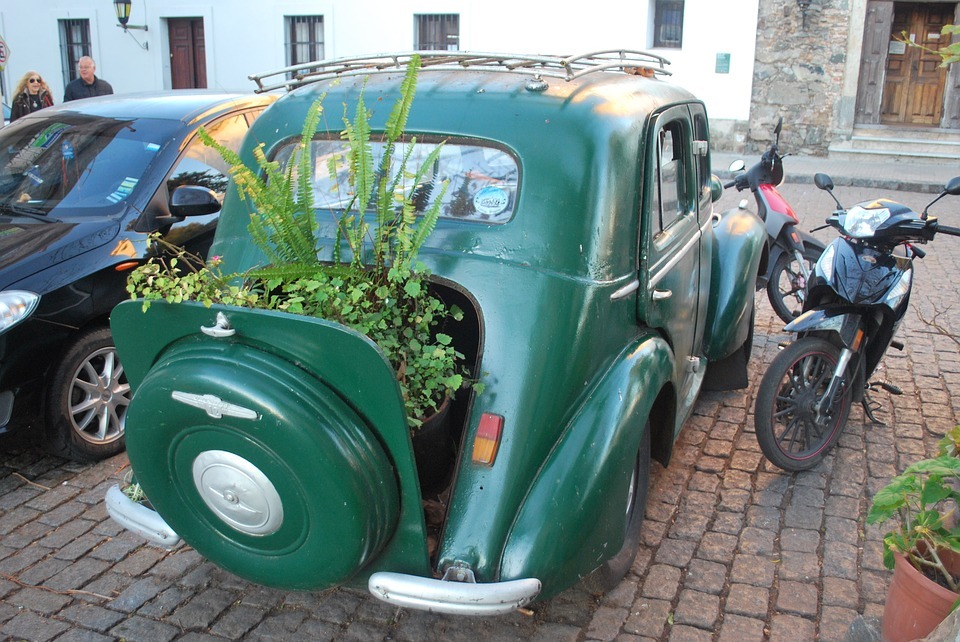 Leiamais – Pixabay
Chasing the Light in Uruguay
Visiting Uruguay was a journey that had transformative effects on my life and one that has impacted my perspective.
One of the major takeaways for me was finding joy in being present and really getting the most out of life in every moment!
On assignment to interview American writer Doug Casey, I booked an extended stay to connect with the local talent in Montevideo. I found a welcoming community of fashion designers to collaborate with, creating a fashion film series I later called 'Connections'.
Creating something from nothing with a community of passionate creatives is one of the most rewarding things in life and I'm so happy to have a talented group of friends in this beautiful country!
Uruguay is ranked first in Latin America in democracy, peace, and is first in South America when it comes to press freedom, size of the middle class and prosperity. Uruguay is regarded as one of the most socially advanced, outstanding regionally, and ranking highly on global measures of personal rights, tolerance, and inclusion issues.
Film by Jeff Zavala
zcreativemedia.tv
Uruguay Travel - Sights, highlights and insider tips
Marco Buch
Uruguay Travel is not as popular as travelling to the neighboring countries of Argentina or Brasil. But the little country of Uruguay has a lot to offer! In this video, I show you all the sights, highlights and insider tips for your own personal Uruguay travel experience!
Find all the info on the blog: https://life-is-a-trip.com/uruguay-se...
And find more pictures of classic cars in Uruguay here: https://life-is-a-trip.com/autos-uruguay
Anthony Bourdain – Explorepartsunknown - Uruguay
https://explorepartsunknown.com/destination/uruguay/
Bourdain’s Field Notes
Welcome to the tiny, overlooked but enchanted land of Uruguay, one of my favorite places to visit and easily one of the top underappreciated travel destinations on earth. It has beautiful beaches, breathtaking countryside, and a capital that evokes old Havana or Buenos Aires—but without the crowds.
This Uruguay Town is the Latest Hot Spot for Wine and Design
by PAOLA SINGER
May 1, 2019
The country's top winemakers, designers, and an army of stylish globe-trotters have ventured inland to Pueblo Edén.
https://www.cntraveler.com/story/this-uruguay-town-is-the-latest-hot-spot-for-wine-and-design
WHAT TO EAT WHILE ABROAD S1 • E24
Visit Uruguay - 5 Things You Have to Eat in Uruguay
Aug 22, 2018

Wolters World
From amazing asado (grilled meat like steaks and chorizo) to Dulce de Leche and Tannat Wine, Uruguay has so much local cuisine for locals and tourists to enjoy. Here is our list of the five most important Uruguayan dishes that travelers should have when they visit Uruguay. And yes, Chivito is #1 on that list! Filmed in Colonia, Uruguay Copyright Mark Wolters 2018
How an Uruguayan town revolutionised the way we eat
http://www.bbc.com/travel/story/20190106-how-a-uruguayan-town-revolutionised-the-way-we-eat
Located on the banks of the Uruguay River and named after a 17th-Century hermit, the sleepy town of Fray Bentos produced one of the most influential food brands of the 20th Century.

UNESCO's Newest World Heritage Sites, in Photos
Every year, UNESCO meets to determine the next round of places that will be added to the organization's coveted list of World Heritage Sites. To qualify, a place or structure must have great cultural, historical, and/or natural significance—say, Angkor Wat in Cambodia, the Great Barrier Reef in Australia, or Machu Picchu in Peru. This year's committee named a whopping 29 new spots, including Italy’s Prosecco region, India’s colorful Jaipur City, and eight Frank Lloyd Wright buildings across the U.S. Below, you’ll find 14 of the most interesting places on the list. Each is as beautiful and diverse as the next—so get your passports ready. 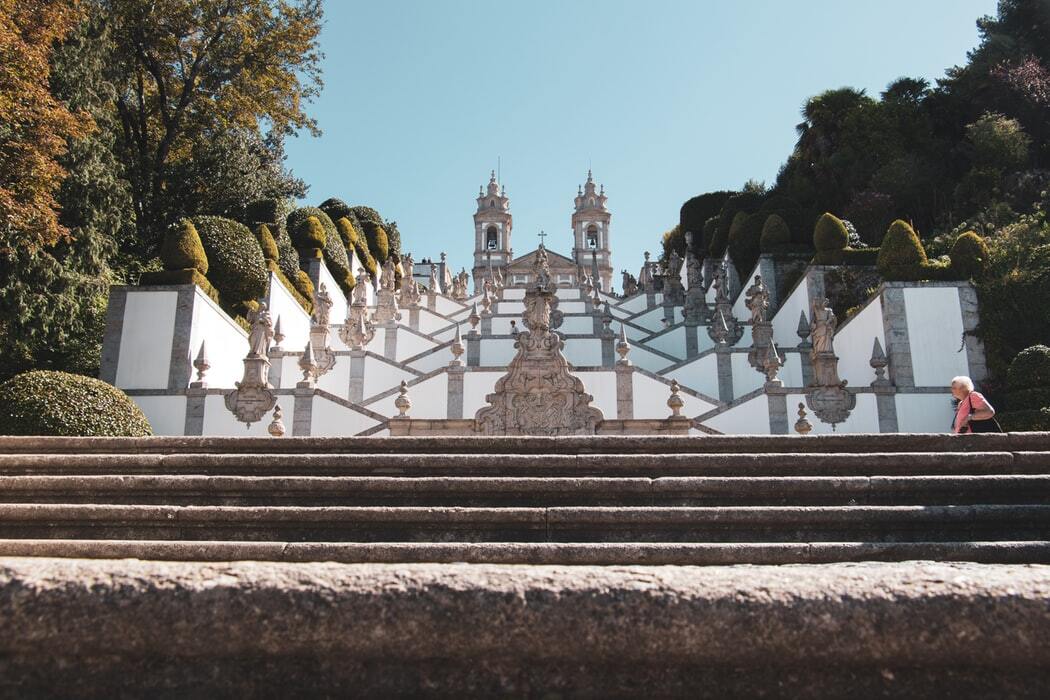 Unsplash Angela Compagnone – Bom Jesus Do Monte, Braga, Portugal
https://www.cntraveler.com/galleries/2016-07-19/unesco-newest-world-heritage-sites
by MEREDITH CAREY
July 11, 2019
A look at the newly added cultural and natural heritage sites—from India to Iceland.
Ross King on the art of history and architecture
https://www.cbc.ca/radio/ideas/ross-king-on-the-art-of-history-and-architecture-1.4986588
The Canadian historian wanted to be a novelist but says it's more fun not to 'make up the facts.'
CBC Radio · Posted: Jul 22, 2019 10:53 AM ET | Last Updated: July 22
Ross King is one of the most popular historians Canada has ever produced.
Writer Ross King has twice been awarded the Governor General's Award for English Non-Fiction. (Submitted by Ross King)
A groundbreaking exhibition finally tells the stories of Native women artists
Oct 18, 2019 6:25 PM EDT
https://www.pbs.org/newshour/show/a-groundbreaking-exhibition-finally-tells-the-stories-of-native-women-artists
“Hearts of Our People” is the country’s first-ever exhibition devoted solely to the works of Native American women. The Minneapolis Institute of Arts assembled the retrospective, which is currently at Nashville's Frist Art Museum and will visit Tulsa and Washington, D.C. in 2020. Jeffrey Brown reports on how the show brings attention to a realm previously “not at all addressed in the art world.”
Beyond the Plate: Fisun Ercan brings tastes of Turkey to Montreal
From a Turkish town to the Quebec countryside, the owner of Su restaurant has followed her passions every step of the way.
Montreal Gazette – May 2019
The Stones of Genghis Khan
Near Kanas, in an old land once ruled by nomadic horsemen, strange monoliths stand where people hang portraits of The Great Khan in their home. 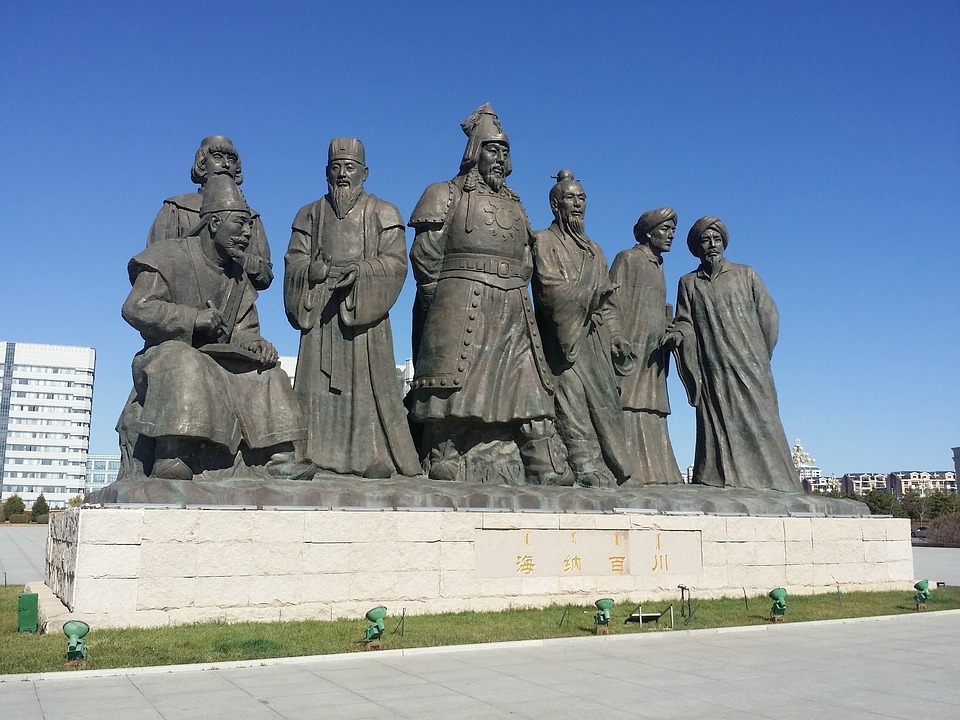 Pixabay Hapilora – Genghis Khan
https://www.perceptivetravel.com/issues/1119/khan.html
Story and photos by James Michael Dorsey
James Michael Dorsey is an explorer, author, and photographer who has traveled extensively in forty-some countries, mostly far off the beaten path. His primary interest is in documenting indigenous people in Asia and Africa. He is a fellow of the Explorers Club, and a member and former director of the Adventurers Club. See more at www.jamesdorsey.com.