Journeys With Heart Tours Originally Scheduled For The Fall Of 2020 Are Now Tentatively Postponed To The Fall Of 2021... Details To Follow Over The Next Few Months. Thank You For Your Continued Support. Stay Safe And Well!

“The marvellous thing about great travels is that their enchantment begins long before departure. You open an atlas, you dream over a map. You repeat the glorious name of unknown cities”.

Give us your feedback on the Journeys with Heart Newsletter:

- Are you enjoying the newsletter content? What would you like to see more off, less off, etc.
- Any thoughts, ideas on what you’d like to see featured in upcoming issues?
- Do you have a travel story that you’d like to submit for the newsletter?
Thank you!
My Beautiful Home project 2015, Painted huts of Zimbabwe, by Veronique Attala
Aug 5, 2016
Veronique Attala
MY BEAUTIFUL HOME PROJECT
Painted huts competition to support the Matobo Villages and preserve traditions
https://www.ekhayagaia.com/my-beautiful-home-project
It all started during a few hikes in the beautiful granite rocks of the Matopos, South of Bulawayo, in Zimbabwe. Walking off from the main paths, adventuring, you could encounter a few traditional homesteads, some seasonal and abandoned for the time being, some filled with the laughs of children.
On one house, one could still read welcoming words together with a flower.
On another, a more elaborate design representing the surrounding hills and on others, there were flowers or geometrical designs.
It was captivating, the love and pride the villagers were showing in representing mother Nature on their mud walls, as well as their happiness and kindness despite extreme poverty… These designs, made with all shades of ochre clays, white ashes and black charcoal, would fade away slowly during the rainy season, like sandcastles. New designs would be created during the following dry season…
There was a strong feeling of being part of the same human soul, through the universal language of art.
With very little means and a great amount of work, some had the ability to create the most enviable and beautiful homes…
True admiration and gratitude triggered the idea of a competition to encourage this wonderful but fading tradition.
A Food Snob’s Food Tour Conversion
Michael Ruhlman, the author of best-selling cookbooks and an accomplished cook, didn’t need a guide. Or did he? 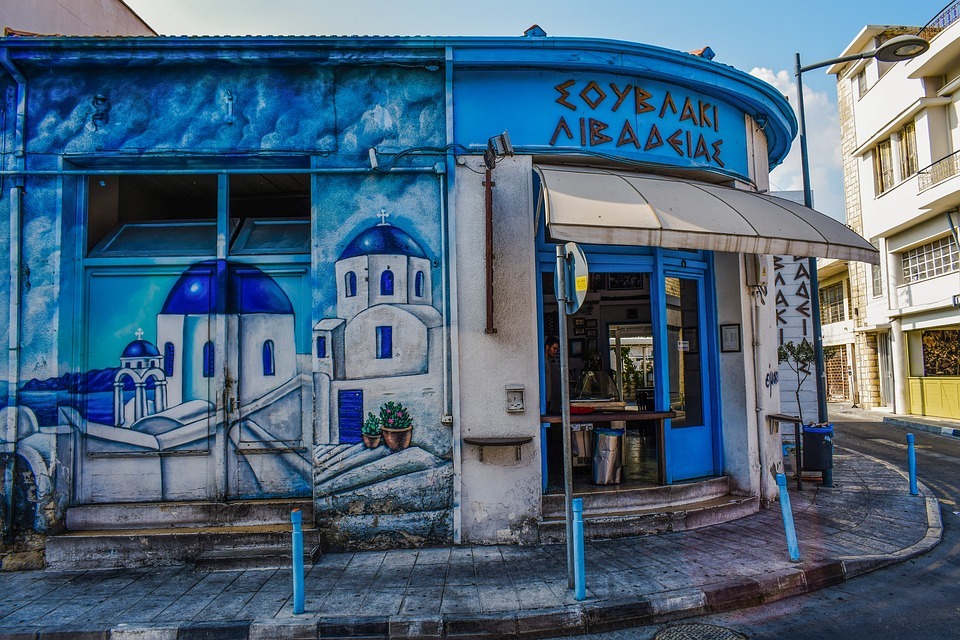 Photo credit: dimitrisvetsikas1969 – Pixabay
https://www.nytimes.com/2020/04/17/travel/food-tours.html
When my wife, Ann, gave me a food tour for my birthday on my first day in Athens a few years ago, I groaned inwardly. “Oh, great, thank you!” I said.
I didn’t have anything against food tours. I’d seen gaggles of food tourists in my Greenwich Village neighborhood, often clogging the sidewalk in front of Murray’s Cheese with a guide shouting to be heard above the din on Bleecker Street, and they seemed to be having a swell time. But I’ve been writing about food for 25 years. I’ve authored many cookbooks, both my own and with revered chefs. I’ve worked as a professional cook and logged too many hours to count in some of the country’s best kitchens.
When I travel, I want to search out where the locals eat, and eat as they eat, among them, not isolated in a crowd of tourists. And not marching from one shop to another behind an umbrella-toting guide. I didn’t need a food tour.
New York Times
By Michael Ruhlman
An open letter from travel photographer, Lola Akinmade Åkerström
The people you meet: the art of connecting with strangers in Uzbekistan
https://www.intrepidtravel.com/adventures/lola-akinmade-akerstrom-in-uzbekistan/
written by Intrepid Travel April 21, 2020

Crystal Cruises
Crystal Storytellers: Rob Caskie
Posted on February 11, 2020
https://blog.crystalcruises.com/podcast/crystal-storytellers-rob-caskie/ (podcast)
Crystal Symphony Cruise Director Shane Morley is setting sail with storyteller specializing in South African History as well as early Arctic and Antarctic exploration, Rob Caskie as they sail from Amsterdam to Monte Carlo.
Rob Caskie’s career as a storyteller launched when he began sharing stories about solo motorcycle journeys in Africa. With a varied background Rob has always believed that human beings have an innate desire to hear stories, and more particularly stories about human beings, rather than events.
Telling stories for a living began in 2001, on the famous Anglo-Zulu War battlefields at the foot of world-renowned raconteur, David Rattray. Researching and sharing human dramas has taken Rob to the Antarctic on numerous occasions, the Arctic, annually to the UK and very regularly to the Battlefields.
Rob chooses stories from his repertoire for clients depending on their theme or what their objective is. He modifies content accordingly, drawing from a miscellany of stories. With stick and trademark shorts, Rob prides himself in positive, unique storytelling and does not rely on electronic or visual aids ‘when the lights trip, Rob does not’.
Viking TV – Lady Fiona Carnarvon – Highclere Castle
A former auditor for Coopers & Lybrand, Lady Fiona Carnarvon is the wife of George Herbert, 8th Earl of Carnarvon. Today, she manages affairs at Highclere Castle, the grand country house that worldwide television audiences recognize as Downton Abbey, including overseeing its grounds and gardens and many special events, such as the Egyptian Exhibition in the cellars of the castle. Fascinated by Highclere’s rich history, Lady Carnarvon has written three books. The first two are about the 5th Earl of Carnarvon, who discovered King Tutankhamun’s tomb with Howard Carter in 1922. Her New York Times bestseller, Lady Almina and the Real Downton Abbey: The Lost Legacy of Highclere, is an amazing tale covering the same period as the first two series of Downton Abbey, beginning in 1894 with the marriage of 19-year-old Lady Almina into the Carnarvon family and continuing through the Great War. Lady Carnarvon published a sequel about life at Highclere Castle during the 1920s and World War II. In conjunction with Lord and Lady Carnarvon, Viking has created its Oxford & Highclere Castle land extension with a Privileged Access tour of the castle and its grounds. The Countess of Carnarvon is a near and dear Viking friend, and is also the godmother of a Viking longship.
Join the Countess of Carnarvon every Friday, live streaming from her home Highclere Castle.
Viking TV – April 3, 2020, Episode 1
Viking TV – Anne Diamond, British Broadcaster and Journalist
Hello to the Viking family! I’m Anne Diamond, British broadcaster and journalist, probably best known for pioneering breakfast TV in the UK in the 80's. But, proud to say, still at it (though no longer getting up at 3 am to do my job!). I’ve been doing the self-isolation thing for the past few weeks now, and am dreaming of my next holidays - like everyone else, I cannot wait, except we all have to. Until then, I’d love to share with you my thoughts and observations, harvested from a career in front line television for the past...ahem..40 years! How I have had to juggle a demanding career with having five sons, how I have broadcast from all over the world at some of the most interesting times in recent history - from the fall of the Berlin Wall, Australia’s Bi-Centennial and Charles and Di’s wedding to interviews with Bette Davis, Ronald Reagan, Prince Philip and even Archbishop Desmond Tutu in the nude! It has been, and continues to be, quite a journey. I look forward to sharing it with you on Viking.TV!
Legendary BBC broadcaster Ann Diamond launches our first Guest Speaker Thursdays, with a treasure trove of stories from her broadcasting days.
Viking TV – April 9, 2020, Episode 1
Viking TV – Wellness with Mona Therese
In lieu of being able to take care of you on board, our wellness team will on this channel be sharing with you some tips on how to stay healthy of mind and body during these unusual times. We invite you in your own time, to listen to Mind & Body podcasts by Mona Therese here.
Viking TV – April 11, 2020 Episode 1
Viking TV – Exploring more with Karine – Episode 1 Food
Karine shares some of her favourite insights into world cultures through these award-winning short films. Explore local lives and working worlds, and enjoy privileged access to places few have the opportunity to visit. Karine is an Executive Vice President at Viking, responsible for designing pre and post travel enrichment, as well as onboard and onshore experiences for Viking guests around the world. A native of Norway, Karine has lived and worked on many continents, and is a great believer in the power of travel to change the world.
“In the kitchen, where we spent a lot of time together, there were two most valuable lessons,” Karine says. “Tidy up as you go, particularly if you have a small kitchen, like she did, where every piece of anything had its particular place. And when cooking meat, make sure the pan (always an iron pan in her case) is very hot, and the butter brown.
Behind the Lens: Lucia Griggi Witnesses Polar Bears while Crossing the Northeast Passage
Apr 14, 2020

Silversea Cruises
Rarely do travelers see as much of the world as Lucia Griggi, whose passion for her art has taken her from pole-to-pole, and to all continents in between. Journeying aboard Silversea's expedition ships as the Director of the cruise line's Onboard Photography Program, the multi-award-winning photographer is spurred by an unrelenting sense of curiosity, and with a strong motivation to document what she witnesses. 'As Silversea’s first crossing of the Northeast Passage, there was a great deal of excitement among our guests, crew and Expedition Team when we set off from Nome in Alaska. Knowing that the itinerary would take us far enough north to reach the Arctic sea ice, and given the time of year that we were traveling, I was hoping to fulfill one of my all-time dreams of witnessing and photographing polar bears on the pack ice—in complete solitude and in their natural habitat. This would be my once-in-a-lifetime, golden moment.'
Read on about Lucia's experience here: https://discover.silversea.com/travel...
Virtual Expedition: South Georgia & the Falklands Ahhhh Moment
Take a breather and enjoy the relaxing wildlife, vista, and sounds of South Georgia and the Falkland Islands.
Lindblad Expeditions
• Apr 1, 2020
How to Make a Skyr Cake | Virtual Expeditions | Lindblad Expeditions
Icelandic cultural expert Dagny Ivarsdottir demonstrates the steps involved in making a Skyr cake, a traditional Icelandic dessert.
• Apr 26, 2020
Among Elephant Seals in Karukinka | Patagonia | Lindblad Expeditions-National Geographic
The southern elephant seal is the largest species in the world, with some males weighing up to four tons. Females spend their entire adult lives pregnant.
• Apr 9, 2020
Any destination and other content featured which is not specific to JWH tours provided in this newsletter is for general information and knowledge purposes only and not an endorsement. The information is gathered through various sources and is subject to change at any time without notice. It is the sole responsibility of the traveller to check with the proper authorities regarding travel to all past, current and future JWH newsletter featured destinations.
Thank you