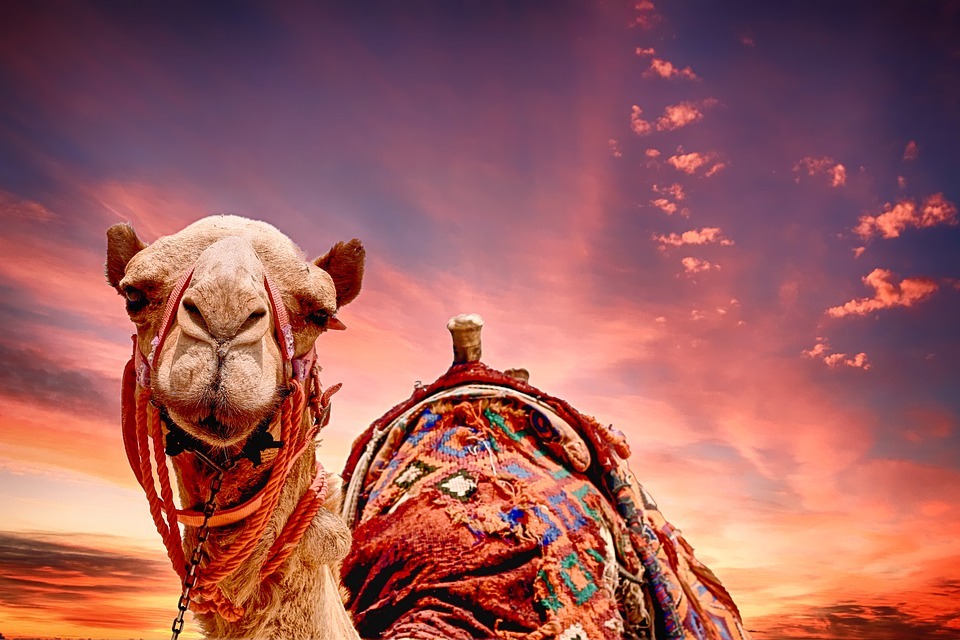 Photo credit: TheDigitalArtist - Pixabay
WOMEN WHO TRAVEL
At the UAE’s First Camel Riding School, Women Are Taking the Reins
Linda Krockenberger opened her Arabian Desert Camel Riding Center last year—and an increasing number of women are signing up for lessons.
Linda Krockenberger is in her element. At a sandy camel farm on the outskirts of Dubai, where the city fades into desert, she’s chatting with farmers in Arabic, adjusting a rope here, patting a hump there. It’s an unusual place to find a young, softly spoken German woman, but as co-founder of the United Arab Emirates' first officially licensed camel riding school, she’s very much at home.
Camels have long played an important role in the region’s history. The dromedary, the single-humped camel found across the Arabian Peninsula, is thought to have been domesticated here up to 5,000 years ago, used as a means of transport and to carry goods on trade routes, and as a source of wool, milk, meat, and leather. Nowadays, they’re most often spotted in the distance from a desert highway, or encountered at resorts and desert camps where a quick camel ride is high on many travelers’ must-do lists
BY NICOLA CHILTON
March 3, 2022
https://www.cntraveler.com/story/at-the-uaes-first-camel-riding-school-women-are-taking-the-reigns
At home in Passau with Dorothea Lechner
Hosted by Dorothea Lechner
Follow Viking guide Dorothea Lechner along the Italianate-style streets of Passau, a German city situated along the confluence of the Inn, Ilz and Danube Rivers, as she shows us some of the most impressive landmarks from her hometown. Over the course of the tour, discover the hilltop Oberhaus Fortress, which was founded in 1219 and served as a stronghold for the Bishops of Passau, as well as the University of Passau, which was founded in 1973, making it the youngest university in Bavaria. Dorothea also shares where to enjoy the city’s flavorful cuisine, along with other tips and insights from a local perspective.
Viking TV
February 25, 2022
The Origins Of Opera
Hosted by Karine Hagen
What is it that makes opera such a popular and enduring art form after more than 400 years? Join Karine as she takes you behind the scenes of this distinctly Italian creation at its source — the opera houses of Italy.
December 2015
Viking TV
Istanbul's Mysterious Basilica Cistern
Hidden beneath the streets of Istanbul is the astonishing, hauntingly beautiful Basilica Cistern, a 6th-century relic that was almost lost to time. Step into its shadowy depths with Karine Hagen to explore this cavernous basin’s many secrets.
Oct 2014
Viking TV
At home in Venice with Valentina Alzetta
Hosted by Valentina Alzetta
Enjoy an exclusive tour of Venice, one of the world’s most romantic cities, as we follow local Viking guide Valentina Alzetta to a few of her favorite places. Discover some of the hidden gems you can find in this Italian city’s treasure trove of beauty, as well as famed landmarks, including its iconic canals.
February 18, 2022
Viking TV
At home in Costa Rica with local guide Irene Arce Gonzalez
Hosted by Irene Gonzalez
Discover the beauty of Costa Rica with guide Irene Arce Gonzalez, who takes us to some of her favorite places. Follow along as she journeys to the Tárcoles River, where crocodiles roam, and the country’s beautiful beaches, which are home to a vast array of wildlife. She also showcases where you can find local, one-of-a-kind crafts.
January 14, 2022
Viking TV
Olive Oil from Croatia
In the tiny village of Orasac, Croatia, Karine Hagen learns centuries-old techniques to make this wonderful organic extra-virgin olive oil.
Oct 2014
Viking Tv
At home in Berlin with Peter Antoni
Hosted by Peter Antoni
Explore some of the most iconic landmarks of Berlin as our host Peter Antoni who is a Berlin expert provides his local insights. Born and raised in West Berlin, Peter shares his love for the city and offers insider tips, taking us to sections of the Berlin Wall, the Altes Museum and other treasured locations throughout Germany’s capital.
February 11, 2022
Viking Tv
Thailand Street Food - MICHELIN GUIDE to Ayutthaya! BEST Thai Street Food in Ancient City!
In this episode I've come to the ancient city of Phra Nakhon Si Ayutthaya about an hour and a half drive north of Bangkok. This is the old capital of the Siam kingdom. Home to some of the best kept temple ruins in Thailand and also the newest addition to the Thailand Michelin guide. I wanted to check it out and taste the famous must-try street foods in Ayutthaya.
March 2022
Orkney Islands
Hosted by Karine Hagen
The Vikings ruled these rugged landscapes from the 9th to 13th century. Join Karine and learn more about their presence, as well as other Neolithic civilizations that date back 5,000 years.
May 2018
Viking Tv
The Creative Taste Of Spain
Barcelona chef Oscar Manresa shares the city's most loved tapas with Karine and explains how this Spanish creation became an inseparable part of Spain's culture and social scene.
Jun 2014
Viking TV
Why Norway Is One Of The BEST Destinations In The World
Norway's nature, food, and folklore make it one of the top countries to visit — tour it all with this in-the-know local. On this episode of Lonely Planet's Best In Travel series you'll discover the best of Norwegian culture. Then tell us: What's your favorite travel activity? Featuring: Stig Bareksten
February 2022
Lonely Planet
Lead photo credit: Kolibri5 – Pixabay
Any destination and other content featured which is not specific to JWH tours provided in this newsletter is for general information and knowledge purposes only and not an endorsement. The information is gathered through various sources and is subject to change at any time without notice. It is the sole responsibility of the traveller to check with the proper authorities regarding travel to all past, current and future JWH newsletter featured destinations.
Thank you