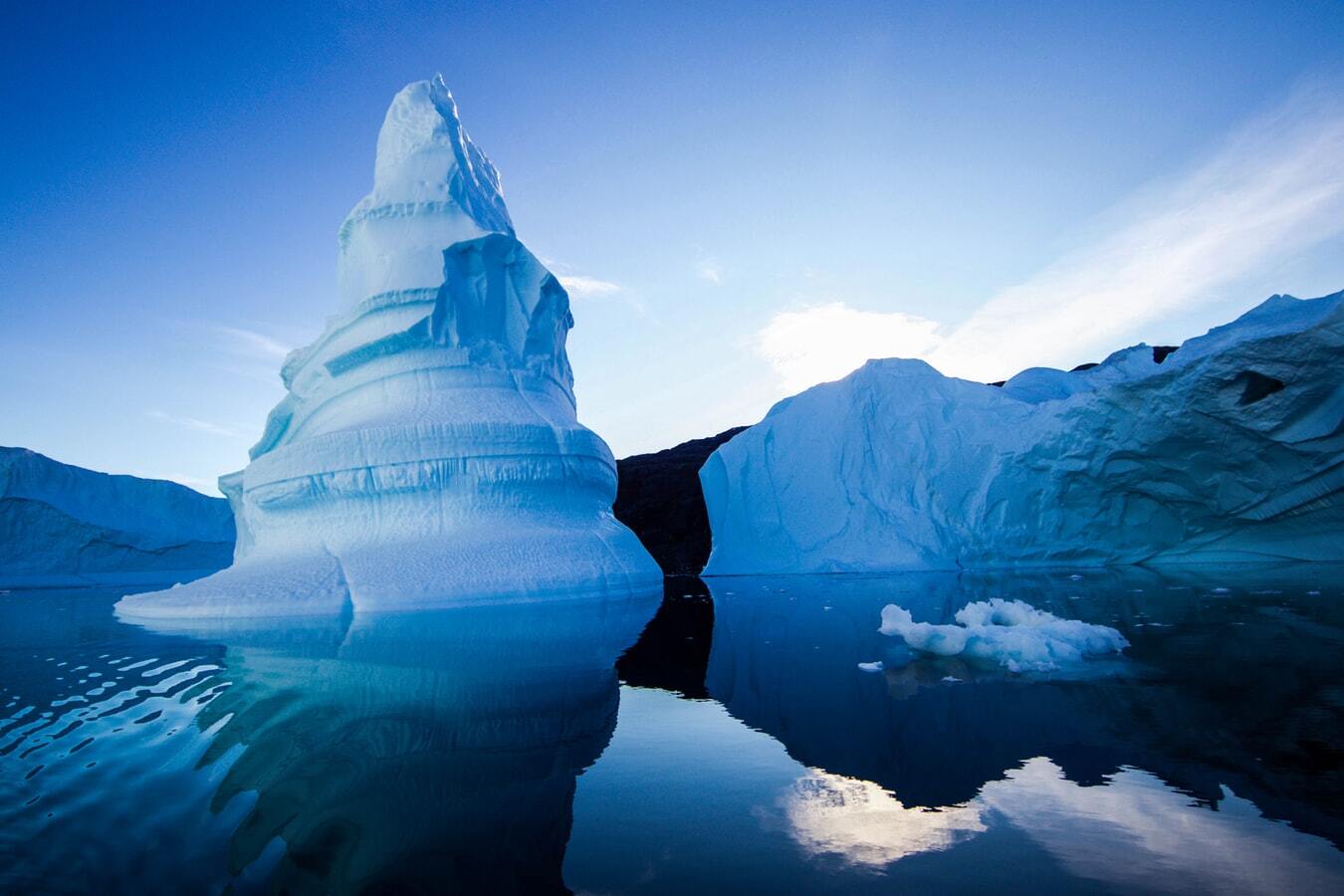 Photo credit: Dylan Shaw – Unsplash
THE NEW STANDARD
Greenland Is Approaching Tourism Slowly—And Taking Lessons from Iceland
As the changing climate alters livelihoods across Greenland, the territory needs travelers more than ever.
With towering icebergs, unspoiled tundra, and unbeatable views of the aurora borealis, Greenland has all the makings of a tourist hot spot—not unlike where Iceland was a decade ago. In the following years, Iceland marketed its raw, pristine beauty, and tourism numbers spiked from 460,000 to over 2 million between 2010 and 2018, effectively turning the destination into the poster child of overtourism.
Greenland, a fragile Danish territory with one of the world’s two permanent ice sheets, wants tourists, but it has no desire to become Iceland 2.0. It’s been taking notes to ensure its own travel push yields sustainable results by prioritizing local jobs and protecting its ecosystems.
BY STEPHANIE VERMILLION
March 24, 2021
https://www.cntraveler.com/story/greenland-is-approaching-tourism-slowly-and-taking-lessons-from-iceland?
Journey to Vinland - In the wake of the Vikings
Trace the route of Viking Leif Eriksson, who discovered American shores 500 years before Columbus. From the Norwegian mercantile city of Bergen, set off to the rustic Shetland Islands in Scotland. Cruise to the magnificently picturesque Faroe Islands, Iceland and Greenland; then, view ancient Norse settlements at L’Anse aux Meadows, Newfoundland. Explore the rich cultures of Saguenay and Quebec City before concluding in cosmopolitan Montreal.
Stephen Fry - What Makes Us Human (BBC Radio 2)
Stephen Fry came in to the BBC Radio 2 studio on the Jeremy Vine show to talk about What Makes Us Human
Jul 3, 2019, BBC Music
Viking TV special: our crew discuss an extraordinary year on board
Hosted by Karine Hagen
Join Karine Hagen, Executive Vice President of Viking, and members of our river and ocean crew, as they reflect on the past 12 months. Find out what life has been like on board for the teams keeping our ships safe, and getting them ready to welcome guests again. Look out for many familiar faces, and enjoy uplifting messages from our onboard staff as we look forward to our return to sailing. March 30, 2021 – Viking TV 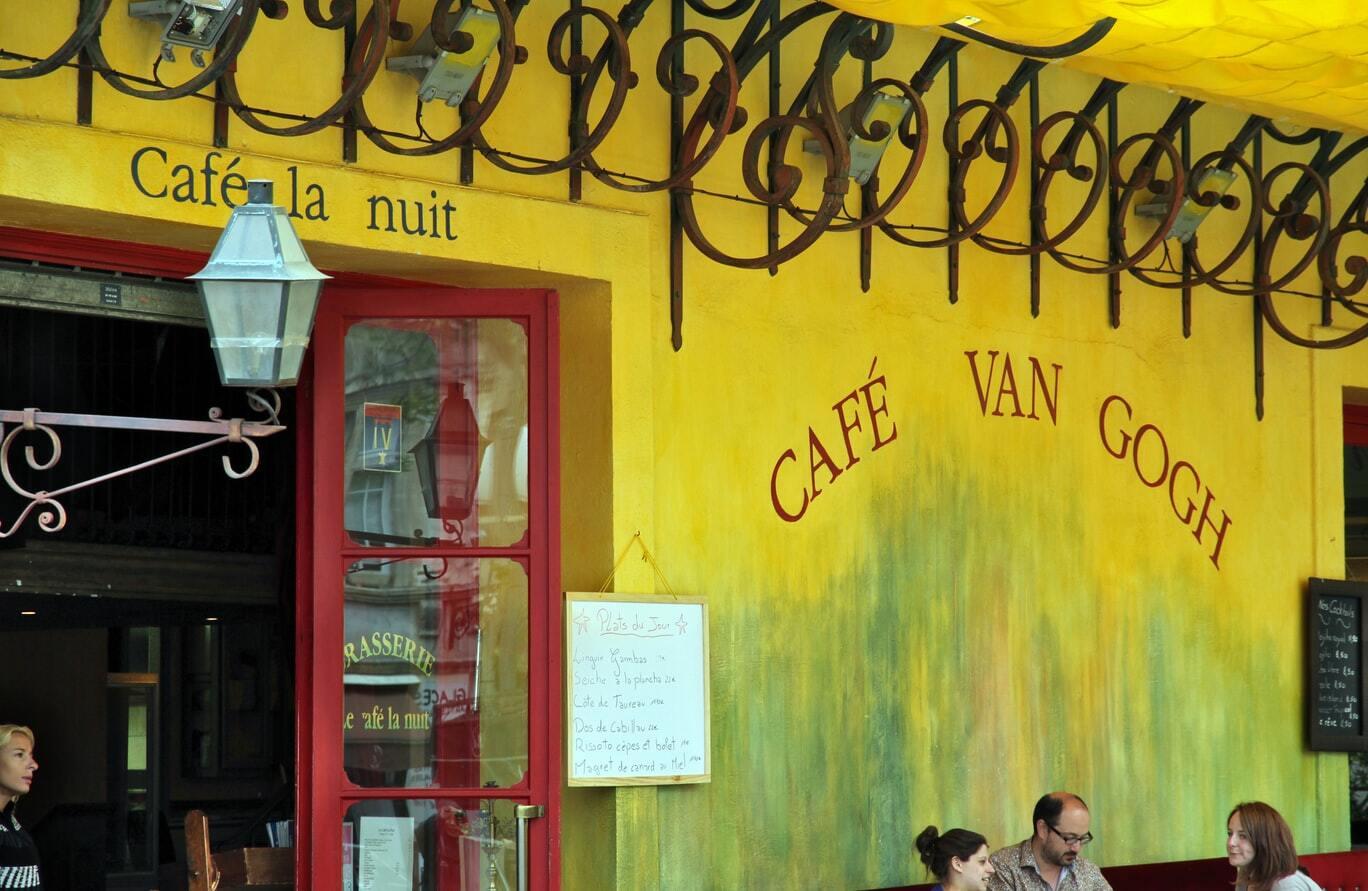 Photo credit: Frank Eiffert - Unsplash
THE INTEL
Why Arles Is Europe's Next Big Art Destination
A long-awaited cultural hub promises to cement the city's place on the global art circuit—but there's plenty more to see in this ancient French town.
The Provençal city of Arles, France, isn't new on the arts scene. Van Gogh created some of his most famed works here, while the envelope-pushing Rencontres d'Arles, the annual photography festival, has drawn visitors to the town's cobbled streets since 1970. Now, with this summer's opening of the Parc des Ateliers at Luma Arles, a sprawling complex on the grounds of an old rail yard, Arles could join Bilbao and Dundee among the ranks of formerly obscure cities turned pilgrimage sites for art lovers. Commissioned in 2008 by philanthropist Maja Hoffmann's Luma Foundation, the center includes a showstopping aluminum-panel-clad tower by architect Frank Gehry that will house works by the likes of Annie Leibovitz and Pipilotti Rist. And it's not Arles's only draw; here's what else to see.
BY LINDSEY TRAMUTA
March 15, 2021
https://www.cntraveler.com/story/why-arles-is-europes-next-big-art-destination?
Retracing Van Gogh's Footsteps in Provence
Retracing Van Gogh's footsteps in the St. Paul Monastery near St. Remy and the Van Gogh walk through Arles in Provence. Photos: Lynette and Gary Taylor; music: 'Windswept' by Kevin M
Lynette Taylor - 2014
Arles, Provence in the south of France
We are taking you to the beautiful city of Arles, in Provence in the south of France. Arles is most famous for its Roman amphitheater, still intact, and its connections with Van Gogh, who spent one of his final years here painting 200 canvases. Its real appeal, however, is found in the lovely pedestrian promenades, the historic landmarks, museums and tranquil plazas, all of which make Arles one of the most charming places in Europe. Click to Subscribe http://bit.ly/2pmdyeu​ There's a lot of these narrow streets in Arles, there is a small pedestrian zone, there's the various squares and the cafés around it, of course, and historic sites. And we will be showing you those highlights coming up right now as we take a walk through Arles. The old town of Arles is comfortably small. It's about a square mile. So it's very easy to see the whole thing on foot. You might consider spending a couple of days here. Or you could visit as a daytrip for example from Avignon which is just 20 miles away and only takes 20 minutes by train to get here. In this program we will show you how you can do everything in one day but certainly if you want to spend more time you decide for yourself. To help you plan your visit we will also present more detailed suggestions about how you could spend a night or two here and still find lots to do.
Judi Dench puts David Tennant and Michael Sheen in their place | Staged - BBC
David Tennant and Michael Sheen (playing themselves) were due to star in a production of Six Characters in Search of an Author in the West End. The pandemic has put paid to that, but their director (Simon Evans - also playing himself) is determined not to let the opportunity pass him by. He knows how big a chance this is for him and turns his attention to cajoling his stars into rehearsing over the internet. All they need to do is read the first scene, but throughout the series they come up against a multitude of oppositional forces: distraction, boredom, home-schooling and their own egos. Staged | Episode 6 | BBC July 10, 2020
Judi Dench‬ David Tennant Does a Podcast With…  (podcast)‬‬
The legendary Dame Judi Dench chats to David Tennant about a lifetime on stage and screen, from Shakespeare to Bond and everything in between. A No Mystery and Somethin’ Else production.
https://podcasts.apple.com/gb/podcast/judi-dench/id1450005207?i=1000489721323
Is This the Most Interesting Man in Portugal?
Latifah Al-Hazza | March 10, 2021
How one man plays his violin in the most unlikely places.
https://www.fodors.com/world/europe/portugal/experiences/news/is-this-the-most-interesting-man-in-portugal
Canção do Mar / Song of the Sea
'A Violin in the most unlikely places' combines musical and natural exploration on some of the most challenging environments on the planet. In this video I approach Portuguese Fado with theme Song of the Sea (Ferrer Trindade / Frederico Brito), whilst presenting footage of big wave surfing in Nazaré – Portugal, and alpinism on Illinizas, Cotopaxi and Cayambe volcanoes – Ecuador. Fado [Fate], is a music genre incorporating music and poetry, that is renowned for its expressive and profoundly melancholic character. It speaks about the harsh realities of everyday life, sometimes with a sense of resignation, sometimes with the hope of resolution. Fado represents a Portuguese multicultural synthesis of Afro-Brazilian sung dances, local traditional genres of song and dance, musical traditions from rural areas of the country brought by successive waves of internal immigration, and the cosmopolitan urban song patterns of the early 19th century. In 2011, UNESCO granted Fado World Heritage status. Thank you for watching. Nuno Santos Violino 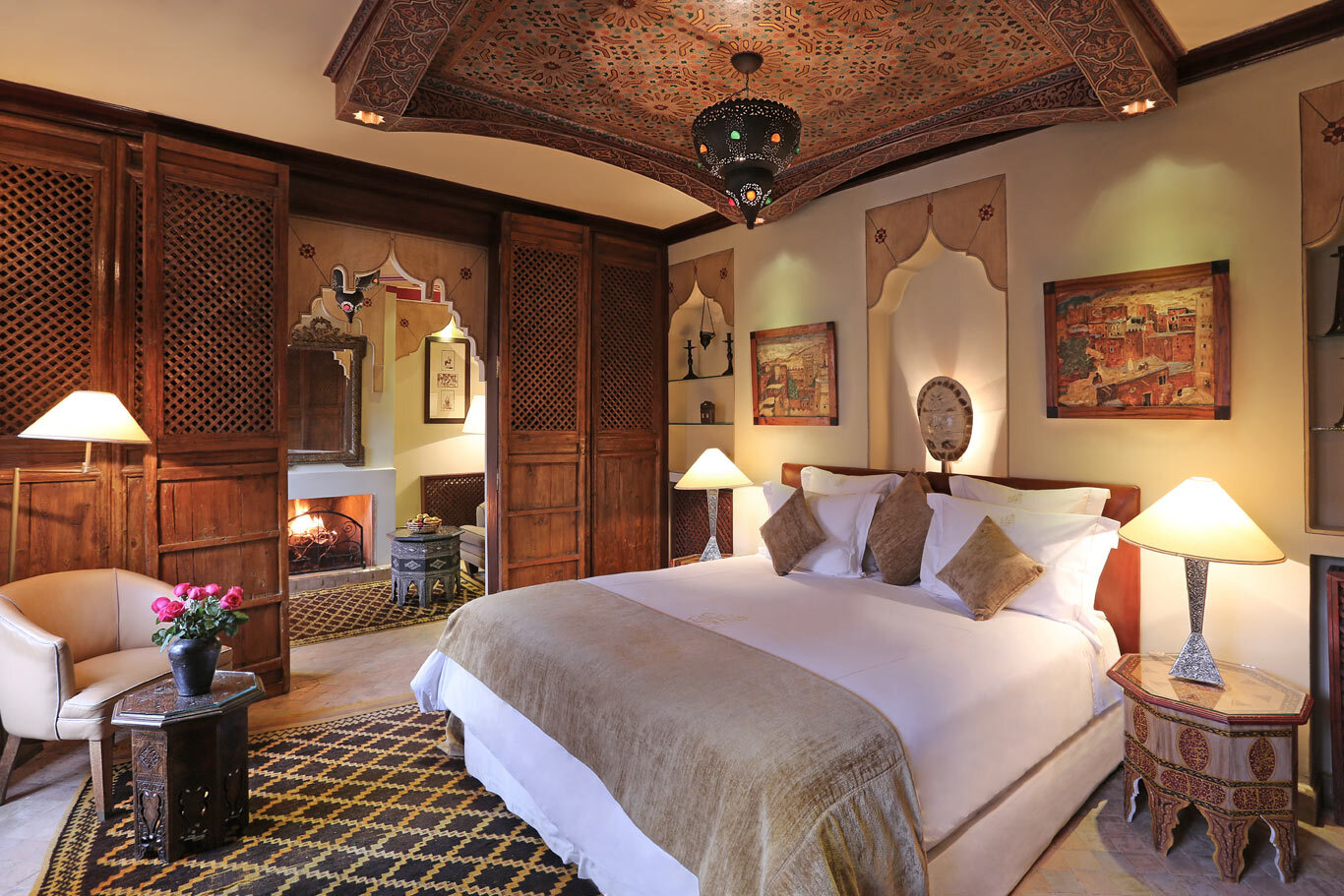 Photo credit: La Maison Arabe
The 10 Most Beautiful Riads in Marrakech
Erika Hobart | March 17, 2021
Marrakech’s riads showcase some of the most stunning architecture and design in the world.
Marrakech has thousands of riads that offer travelers an intimate and peaceful retreat from the city’s bustling medina. By definition, a riad is a traditional home that contains an interior symmetrical garden and rooms facing inward so that their doors and windows overlook the courtyard rather than the streets. The arrangement was intended to provide privacy for family and friends to spend time together, and to keep the home cool during the hot summers.
Over time, the term riad has become more loosely used to describe the guesthouses and boutique hotels in Marrakech. And because many of these properties have been bought and restored by foreigners, they showcase design and architectural influences from Morocco and the rest of the world. The result is a fabulous fusion that’s a feast for the eye
One of the featured riads in Marrakech – La Maison Arabe
https://www.cenizaro.com/lamaisonarabe/marrakech/gallery
La Maison Arabe’s long culinary history dates back to 1946, when two enterprising French women, Hélène Sébillon-Larochette, and her daughter, Suzy, were granted the right by the pasha Thami el Glaoui to set up the first restaurant open to foreigners in the medina. The pasha provided a servant from his nearby palace to teach them the intricacies of Moroccan cuisine, and La Maison Arabe quickly became one of the leading restaurants on the African continent.
La Maison Arabe has since become renowned for its cooking workshops, which are open to in-house guests and all food lovers visiting Marrakech. Learn step-by-step the secrets of authentic Moroccan cuisine from our dadas (traditional Moroccan cooks), using modern, everyday kitchen equipment to make precious recipes passed down from generation to generation.
https://www.cenizaro.com/lamaisonarabe/marrakech/cooking-school
Cheese Stuffed Pastries (Briwat) /CookingWithAlia - Episode 43
La Maison Arabe (http://www.lamaisonarabe.com/​) Dada Series showcase staple Moroccan recipes that are part of La Maison Arabe cooking school menu and now, that you can easily make at home! Try these wonderful goat cheese Moroccan pastries... to die for!!! WRITTEN RECIPE: http://goo.gl/VvjbX7​
At home in Barcelona with Helen Waters Silva
Hosted by Helen Waters Silva
Follow knowledgeable local host Helen Waters Silva on a tour through beautiful Barcelona, where she shows us around three of the city’s most fascinating neighborhoods. In addition to visiting the Antoni Gaudí-designed Park Güell and Sagrada Família, Helen takes us to a wide range of iconic sights, including the towering Arc de Triomf, the tree-lined Las Ramblas and the Plaça Reial in the Gothic Quarter. Discover this vibrant Catalonian capital from a local perspective and get valuable tips that you can use during your Barcelona explorations.
March 26, 2021
Colours of Pakistan: Pashmina
Buying a Pashmina can be really daunting, especially when there’s so many to choose from. But you can’t miss it if you visit Pakistan. Follow Canan on her quest for the perfect pashmina, as she finds out how much time and effort goes into making them. The Colours of Pakistan series captures Pakistan’s rich history and culture through a wild adventure across the country.
TRT World - Feb 22, 2020
Saving Earth: Turkey’s Taurus Mountains
Turkey’s Taurus Mountains are host to natural treasures, serving as an example of how humans can coexist with nature without compromising the environment. TRT World – April 2,2021
Rick Stein and the Japanese Ambassador | BBC Documentary
Rick spends one week visiting Japan's vibrant fish markets and island restaurants, aiming to master the art of cooking fish - Japanese-style. BBC Documentary – April 3, 2020
Tanzania's Undersea Sanctuary
BBC Travel, March 7, 2021
Inside a Village Guesthouse in AFGHANISTAN
This might just be one of the most beautiful guesthouses I've stayed at 😍 After a long journey across frozen valleys and mountain passes in the Afghan region of Bamyan, our crew of four finally made it to Chehel Burj, where an ancient fortress towers high above our home for the night. See how we spent the evening in this super remote valley in Afghanistan, and what we found the following morning... Eve zu Beck – April 2, 2021
Lead Photo Credit: Richard Jacobs – Unsplash
Any destination and other content featured which is not specific to JWH tours provided in this newsletter is for general information and knowledge purposes only and not an endorsement. The information is gathered through various sources and is subject to change at any time without notice. It is the sole responsibility of the traveller to check with the proper authorities regarding travel to all past, current and future JWH newsletter featured destinations.
Thank you